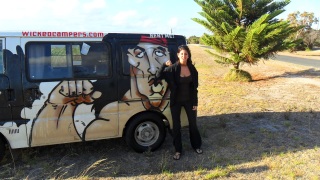 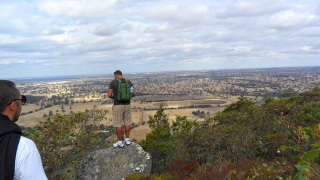 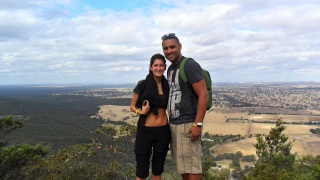 Day 2 we woke up in the middle of nowhere and went on to Mount Gambier. We drove into what was called the “blue lake”. My mom loves the colour teal, and this water was more blue/teal than I have ever seen before. It was unreal almost. We stayed there like tourists taking pictures and then moved on to drive up to the Grampians. The Grampians is an area just inland near Mt. Gambier that has a huge national park, wineries, and lots of wildlife. I studied the map for a while and decided to take the Mt. Sturgeon hike in the Grampian National Park. At the time it seemed like a great idea. The pictures showed waterfalls and flowers and streams. When we actually walked or hiked this mountain, 7 kilometers of uphill. No stream, no waterfall, nothing fun about it, except when we finally made it to the top. I have never climbed anything other than a rock-climbing wall, so I felt very accomplished and the views were amazing. We even made some videos from 1000 feet high! Oh, and we saw a porcupine and some kangas on the way up, that was cool too. After our hike, it was getting dark (the hike took 3 hours about) and we found a place called Grampians Retreat and decided to ask where we could find a shower and/or place to park Rambo. We met this lovely couple; Marie and Dennis. They began by telling us about a park back in Dunkled (a small town we passed through), which was fine with us to stay. After talking to them for a while, they offered to let us sleep in their retreat center and use their shower facilities. We didn’t except that kind of hospitality and were really surprised! Marie even told me that my University has a class that takes its students to her retreat center, and it happened to be the same class I am enrolled in, ironic huh? So I will be seeing a bit more of Marie and Dennis when I start school out here. Anyway, we settled in at the retreat center, made some burgers and called it a night. Because our camper only had one light and we didn’t want to kill the battery, we pretty much went to bed when it got dark at night which was about 9pm… lame, I know. But! Day 3 we woke up at 7:30am to get back on the road.
Day 3 was all about the Ocean Drive. We drove south down from Dunkled to Port Fairy and passed through small towns along the coast; Warnambool, Apollo Bay, and some others. This was where the ocean hugged the side of the road. On one side we had mountains, and another was the Pacific ocean. We stopped at a million tourist “lookouts”, and even found a few on our own. The most famous was the 12 Apostles, which are huge rock formations in the ocean that have eroded to be now 8 Apostles over time. My personal favourite was, ok well my TWO favourite spots were Worm Bay, and an awesome Gorge we found. Worm Bay was a small lookout area, but you could walk right down to the beach. It reminded me of the beaches of Bermuda, which are incredible. The Gorge we found was a bit of a hike to get to, but the trail led us to a “river” which led us to the ocean. I stood on some kind of rock formation, and a wave so huge came in, that I literally held on for my life. These currents were stronger than I have ever seen and really scary, but exhilarating at the same time. I learned my lesson quick, and decided to join the boys on the dry land. Day 3 was one with lots of sun, and lots of stops, so we were tired early. We ended up in a small cove along Great Ocean Road and slept next to the ocean.

Day 4 we woke up in the most beautiful spot. The night earlier, we had just pulled off the ocean road, not knowing what the sight was going to be like in the morning. We woke up to the sun in our faces and the sound of the ocean, unlike anything I’ve ever experienced. We took off at about 8:30am and found ourselves in a Koala haven! Well, not haven.. but I saw 5 or 6 koalas. I fell in love with them, and learned that they sleep REALLY high up in the trees. We had been looking a lot lower than they actually were, and found some babies even! They made my day :). The rest of Day 4 was spent with a lot of driving, some aimlessly because I let the boys decided where to go, and eventually we ended up in Geelong, a really nice town about an hour from Melbourne. We went to the Geelong waterfront, which apparently is world renowned, and found an awesome “ocean playgound”. Diving boards, slides, all kinds of stuff for adults to play in the ocean. It was really cool, AND they had showers! Which was a huge bonus. We ended up soaking up the sun in Geelong, and reading our books as the sun went down. As for our sleeping spot on Day 4, we ran into some trouble. Rambo decided he didn’t want to come out of forth gear. So pretty much, our gear box was shot. It was black outside by this point and we couldn’t find any campgrounds or deserted streets to park. We ended up in this really weird open land off of some lake. Kenny decided to park in the middle of the open grounds, which kept me up all night because I was worried cars wouldn’t see us and run straight into Rambo. Many cars came and went, but again we woke up to sun and the sound of the ocean in the morning.
Day 5. Not only were we woken up by sun and the sound of the ocean, also by this creepy man staring at our camper. He took his shirt off, and looked like he was on some crazy drugs and hadn’t been to sleep yet from the night before. He came right up to the camper a few times and did not stop staring into the van. Finally, the boys said something and he stepped back – but the staring continued. So weird. We decided to get outta there, and when we left, the creepy drug man waved goodbye. I hated him. Finally, on our way to Melbourne! But… as if any part of our trip could be easy. Rambo decided to overheat because of the gear box. We made it to some BP petro station, and had to wait over 2 hours for a tow truck. When it got to us, we had to pay for a $30 taxi back to the Wicked Van rental place, and were out 4 hours with the van by this point. In the end, the people in Adelaide had rented us the wrong van. Rambo wasn’t supposed to be ours, and we paid for a much nicer vehicle we found out. Rambo wasn’t even running properly, which could’ve also explained why we ran out of propane after 3 uses. (I forgot to mention that) So, we asked for another van so we could at least get our luggage to a hostel – this van was much much MUCH nicer than Rambo. We had the new van for a few hours, found a hostel that had room for us for a week, and here I am. Sitting in the 8 bed hostel bed, room 102 in Melbourne Australia. It feels nice knowing that this city is finally “home”, for the next 6 months at least. Now the boys are returning the second van, I am settling in – and its almost 5pm. There is a bar under the hostel called the Velvet Underground, which reminds me of the one in Toronto. Anyway, happy hour is 5-8 and the reception gave us tickets for a free drink because we will have to change rooms on Tuesday. The hostel is right next to my school (I think) so I can be all ready for orientation on Tuesday.
I am going to stop writing stories now and start living the dream here in Melbourne, ha! This weekend is the St.Kilda beach festival and they close down the streets and open all the bars. I have one more weekend of freedom until I have to get into school mode.
Bye for now! Thank God for adventures.
Till Next Time…

Hi! My name is Tara Murphy. I am a self-proclaimed Blogger, foodie, and travel fanatic. Yes, I am one of those people who takes pictures of their food. Why? Because it is delicious, end of story. I created my first blog in January, 2012 before I started my 11-month journey around the world. I am now settled back in Toronto, Canada and am started a little thing called REAL LIFE. What even is real life? Who knows. All I know is I love life and I love writing. So I write about life, all aspects of it. The good and the bad.
View all posts by Tara Murphy »
« Thank God for Airport buggies
Thank God for fine Australian wine. »

One thought on “Thank God for adventure.”

Life is a Diving Chaos. Embrace it. Breathe. & Enjoy the Ride.